Update on My Swing 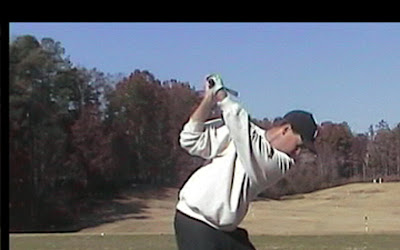 As some of you may know, I quit the game for the past 8 years after playing competitive golf as an amateur, collegiate athlete and later on a pro. Just as I got the itch to get back into the game, I had to have major surgery. I'm allowed to take light, full swings (pic above) and just wanted to give an update for those who may actually care.
I'm basically working on drills. I've got a few problems as I see it:

1. My irons need to go - they are old and have graphite shafts in them and my biggest struggle (high trajectory) is due to some swing flaws, but using graphite shafted irons doesn't make things any easier.

2. Not quite shallow enough on the downswing

3. My thru pivot, quite frankly, sucks.
4. I baby flip through the ball

So now I'm working on some drills, like hitting 1/2 shots and 3/4 shots while keeping my right foot flat and using a FedEx box and aiming it right of the target so I come down more from the inside.
While I want to get some new irons badly, I promised myself that I won't get new irons until I improve my lag and get it so that I'm "covering the right arm" on the downswing. The latter has been accomplished. My lag isn't awful and I'm not casting the club, it's just that my pivot blows and I've probably lost a lot of flexibility from the surgery.
Anyway, Doctor says I can play full time come December 17th and I'm looking forward to it, but not the cold weather that comes along with it.
Until then...
3JACK
Posted by Rich H. at 5:19 PM