What To Look For: 2019 Valspar Championship

The Tour comes back to Innisbrook for the Valspar Championship.

The Valspar Championship was originally called The Tampa Bay Classic and was created in 2000. Although it is referred to as being in Tampa, the course is located in Palm Harbor which is about 45 minutes northwest of downtown Tampa.

Generally, I find that this event flies under the radar as far as PGA Tour events go. This may be due to the area being, what I consider, more of a ‘tennis town’ than a ‘golf town.’ Tampa gets as much rainfall as any area in Florida, but it’s also the lightning capital of the US (hence the Tampa Bay Lightning NHL team). There’s not much in the way of great golf in the Tampa/Clearwater/St. Pete area. The closest for really good golf is either in Sarasota or about an hour north in the Ocala/Brooksville area. And with the Tour shifting the schedule so it’s the week after The PLAYERS Championship and the week before the World Match Play event, that will likely mean weaker fields in the future.

It’s too bad because Tampa is one of my favorite cities in the country and Clearwater (just south of Palm Harbor) is always a fun place to be. Tampa’s infrastructure and charm of the old south, Cuban heritage, combined with it being one of the first place where northeasterners came to actually reside in Florida full-time and the modern urban touch along with it having a sleepy beach town appeal make it very unique.

And the Copperhead course at Innisbrook is well received by the fans and the players. It’s a pretty king-sized course though. And the par-5’s are critical to a player’s success there.

Unfortunately, that means the 14th hole is the last Critical Hole on the course and it can make the event rather anticlimactic.

This is one of the easier driving holes on the course. The average tee shot will go roughly 290 yards and they will find the fairway about 62% of the time. There’s no water or fairway bunkers here either.

What To Look For: 2019 The PLAYERS Championship

The PLAYERS Championship actually started in 1974 at the Atlanta Country Club. It then moved to Colonial Country Club in Fort Worth the following year before moving to the Inverrary Club in south Florida in 1976. Then, the event found its permanent home in the Sawgrass area of Ponte Vedra Beach. It actually started at Sawgrass Country Club’s Oceanside course which I’ve heard great things about. Then in 1982 it moved to the Stadium Course at TPC Sawgrass.

Prior to the 80’s, Robert Trent Jones, Jr. was the preferred designer of the Tour, particularly on their major championship courses. Having grown up playing a lot of RTJ courses when I was a junior golfer, the words ‘big and bold’ always come to mind when I think of his courses. Of course, some of that was influenced by the Tour’s desire to make the courses bigger so they could seat more fans and have more corporate seating.

But right about the late 70’s to early 80’s, the Dye design became en vogue. Dye had the ability to create a course that could hold the fans, but did some innovative stuff like using railroad ties around greens and bunkers and of course…the island green emanating from the 17th hole at TPC Sawgrass.


I’m not a historian of golf architecture, but it’s my opinion that Harbour Town and the 17th at Sawgrass really made Pete Dye’s career as an architect. Initially, many of the players…including Jack Nicklaus (who helped him build Harbour Town in 1967) did not like Sawgrass. But, the 17th was so different, iconic and artistic that every golfer wanted to play it. And with Harbour Town being established as one of the very best courses in the country, I think it helped establish Pete Dye as the ‘go-to architect’ of the 1980’s.

The players started to like Sawgrass much more when they re-contoured the greens. Over the years it’s been appreciated, but conditioning has always been a concern. Mainly it’s the greens that are the issue. Whether they were super slow in the 90’s to the issues with grass dying off on holes like #4 the past few years. If you get a Tour player that doesn’t like Sawgrass, it’s usually a bomber that loses their advantage of power off the tee because of the design of the course.

That’s because the 10 par-4’s consist of 5 dogleg right designs (#1, #4, #5, #7 and #15) and 5 dogleg left designs (#6, #10, #12, #14 and #18). Contrary to popular belief, there’s not a lot of working the ball both ways off the tee on Tour. Thus, it becomes difficult for a long hitter to control the driver on the holes designed against their natural ball flight because Dye has made those holes just narrow enough to get those players into trouble off the tee.

The final Critical Hole on the course is the par-4 18th.

This is the most difficult hole to drive the ball on the entire course as the average tee shot will travel about 280-285 yards and find the fairway roughly 65% of the time with 6-8% of the tee shots finding the water. The other roughly 25-30% of the shots that miss the fairway end up having approach shots blocked off by the trees on the right side.

Moving the tournament back to March was a great idea. May can get unbearably hot in Florida. This is also not the most spectator friendly event as there is no bleacher seating by the range and the range is far away from the ropes. The parking lot is about the size the of the actual course and just walking from the parking lot to the course is a hike and the course is difficult to navigate because you can’t watch multiple holes and multiple shots from roughly the same area.

Having said that, all reports I’ve received from Sawgrass is that the course is pretty firm and that just favors the short, but accurate drivers of the ball more.

What To Look For: 2019 Arnold Palmer Invitational 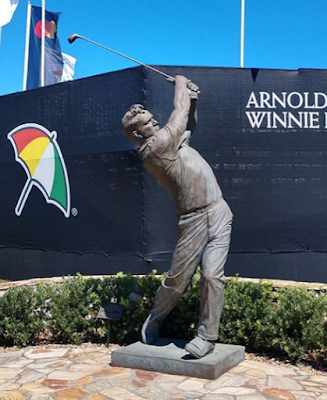 Walking back to your car at 6:10 PM with your sore feet and it getting chilly out and seeing the grounds crew working at a fever pitch on the 8th green to prepare for tomorrow's event and one of the guys on the grounds crew...who has probably been there since 6 am when it was a brisk 39-degrees...driving by you with a big wave of a hello and a smile.

This is such a great representation of the Arnold Palmer Invitational and the man himself.  Where most people would be agitated, tired and looking to finish the long day...and deservedly so....you get a big wave hello and a smile like you're the long lost friend that saved them from a house fire years ago.

And every year, like this one...I see great friends like Nick Starchuk, Jeff Haas, Charles Howell III, Denny Lucas, Nick Jones, Pat McCoy, Grant and Osten Waite...just to name a few.  And it's always a good time.  It's a relaxed atmosphere that is still the most fan friendly event I've ever been to on Tour.  It's fairly easy to walk, it's a beautiful layout, there's a grandstand right behind the players on the range and you can almost touch the players on the putting green.  I've been to quite a few Tour events and outside of The Masters (which isn't really an actual Tour event)...this is the best fan experience out there.  And with The PLAYERS Championship now scheduled the following week, this should provide a very strong field year-after-year.

Here's the deal on the tournament...the course is mostly about mid-to-long approach shots and the course goes from crusty to soft at odd times.  Generally, the course has a bias towards playing soft.  Mainly because holes 3-8 kinda sit in a bowl.  When it does...it greatly favors the bombers.  When it plays firm...it starts to favor short, but accurate hitters of the ball.

Right now the course is fairly soft due to the rain on Tuesday.  My guess is that it will favor the bombers on Thursday and Friday and then it will be up to see who can hold on during the weekend.

#18 is the final Critical Hole on the course.  However, #4 could be a big factor this week.

This hole plays uphill and is a more difficult of a drive than it looks.  However, they extended the tee 50 yards back and there will be some golfers that will have difficulty reaching the fairway off the tee.

As we can see, it's so critical to find the fairway here (red dots = birdie, blue dots = par, black dots = bogey or worse).  The field will find the fairway about 50-55% of the time.  About 3-4% of the tee shots will actually find the water.