Forces and Motions Golf Lesson with Sales and Sinclair

Here's a video with Dennis Sales and Jon Sinclair discussing some biomechanical concepts with relation to 'swing plane.'

One of my favorite quotes comes from Performance Psychologist, Dr. Bhrett McCabe...quoting his baseball coach at LSU, Skip Bertman:

If we as a team will do the things that no other team has the guts to do, we will always be on top.

It's why I'm a big fan of Bryson DeChambeau.  It's not so much that he has learned from The Golfing Machine or uses single length irons, it's that he is willing to try things that no other player has the guts to do.  And that reminds me a lot of what another great golfer, Moe Norman, once said:

A bad shot will never hurt my golf swing, it will only hurt my vanity.  And vanity is the luxury of fools.

You see, that's why so many golfers are afraid to think outside of the box and think on their own...they are afraid to have it fail because they think they will look foolish.  And that's a fear of hurting your vanity.  That's the beauty of Mr. DeChambeau (and Moe), he doesn't have a vain bone in his body.  If he tries something and it doesn't work out, it's no big deal.

The larger failure is not being willing to try.

Speaking of DeChambeau, one of the features of his equipment is the Jumbo Max Grips.  The grips are extremely oversized and weigh roughly 125 grams.

Recently, GEARS Golf tried out the Jumbo Max grips for themselves and found some interesting results.


Personally, I could NOT hit the Jumbo Max Grips.  I believe they are designed more for the golfer that grips the club more in the palms of the hands like DeChambeau does.  I grip the club more in my fingers.  I did see a similar result as to what GEARS showed...it was very hard to get the face closed at impact.  For me, I was hitting everything right and high and I just could not get a feel for the grip.


The Enlow Grips are reverse tapered grips.  So the butt section is smaller in diameter than the mouth of the grip.

Below is a picture of the butt diameter of the grip.  The Enlow Grip is on the right.  It has the same butt diameter as the standard size Golf Pride Tour Wrap 2G grip 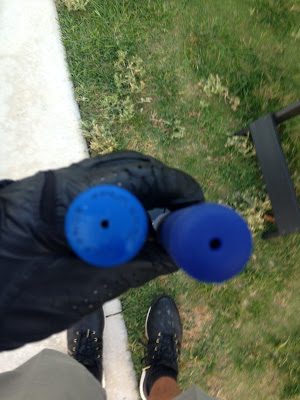 And here's a look of the Enlow Grip at the mouth of the grip, showing the reverse taper design: 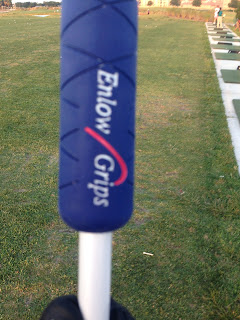 For standard grip installation, Enlow says you should wait 10 hours after installation to use the club.

The Enlow Grips weight about 125 grams.  I use MOI matching instead of swingweight matching.  I found that with the driver it increased the MOI by about 30 points (the same amount that the Jumbo Max Grips increase the MOI on my clubs.  However, when I installed the Enlow Grip on my 6-iron, the MOI only increased by 18 MOI points.

This is the big part that readers are interested in.

Personally, I found the Enlow Grips to be FANTASTIC.

I first installed the grip on my Driver.  I didn't change the MOI.  The driver's MOI went from 2,825 to 2,855.  I kept it at 2,855 and immediately fell in love with the grip.  I was hitting the ball hard and more impressively, felt like I couldn't miss with the driver.

Over the weekend I used it and drove extremely well.

My belief is that the club head speed is really staying about the same with the Enlow Grip.  I certainly did not lose any distance off the tee.  However, I gained a lot of accuracy.  In fact, I found that with this grip it is almost impossible for me to miss left with this grip on the driver.  There were some rightward misses, but that was due to poor execution instead of the grip.

In fact, I found the greatest benefit to come from shots missed off the toe.  The grip seemed to make toe hits far more forgiving.  And I could work the ball right-to-left and left-to-right and hit the same trajectory windows that I did with the regular grips.

I had the grip blown off the driver and I installed it on the 6-iron.  Again, the same type of results.  I just couldn't miss left with this grip on the club and toe shots were far more forgiving.  It's almost like an automated grip.

Furthermore, the claim is that the grip is more ergonomically designed.  As Brad Enlow described, many common products have a reverse taper design.

I found that the Enlow Grips with the 6-iron took a few shots to get used to compared to the standard size grips.  With the driver I had no issue at all and picked it up right away.  But after a dozen shots or so with the 6-iron I stated to get the hang of it.

So give them a shot...you can find them at www.enlowgrips.com.  The only thing you have to lose is your vanity.

Here's a video with Jason Goldsmith and Graham Boulton explaining the basics of FocusBand and using it for golf: