Seung-Yul Noh wins his first tournament of his career at the Zurich Classic:

Here are how my picks finished at the Zurich:


Here are my picks for Quail Hollow:

Streamsong Golf and Resort is located in Bowling Green, Florida which is about 75 minutes from Disney World, 60 minutes from Tampa and 40 minutes from Lakeland. This is somewhat of an en vogue idea with golf course design. Build a course in the middle of nowhere where the land is cheap and good for golf course design. Have a legendary design team create a links style or 'Australian Dunes' style course where there is no need to bring in and grow trees. Put a hotel by the course and charge a lot of money for the public to play there.

I have not played Streamsong, yet. But, everybody I've known that has gone there has raved about it. Here are a bunch of videos on Streamsong that I think people would enjoy:

Here's how my picks at Harbour Town faired:


Here are my picks for New Orleans:

Miyahira: Posting on the Left Leg

Here's a video from 3Jack Golf Top-50 Instructor, Kelvin Miyahira, discussing the concept of 'posting on the left leg.'

Here's a video from European professional, Mark Crossfield, showing the differences between Ping's S55 and i25 iron models.

I plan on trying both of these model of irons from Ping sometime this year as I am interested in irons with more of a bounce angle as the Florida turf does not interact that well with low bounce angle clubs.

While I have traditionally favored a blade design, I feel that today's irons there is not a lot of difference in the MOI around the sweetspot in irons outside of the 'game improvement' models. I don't need a lot of forgiveness with irons, particularly since I utilize MOI matching. But, what tends to be more important (IMO) is the CoG placement. Crossfield's video shows the importance here as he is obviously a low handicapper with a good swing. That would make one think that he is best suited for the S55, but the i25 model ends up being the better fit.

Rate of Closure and Spin Axis

One of the things that had been discussed over a year ago was the effect that Rate of Closure will have on tilting golf ball’s axis. This was actually asked by Erik Barzeski and Dave Wedzik from Golf Evolution (www.golfevolution.com) and later confirmed by Fredrik Tuxen of Trackman. I didn’t quite understand it at first and neglected up until a few months ago.

First, let’s briefly go over some of the main terms for those that don’t understand what we are talking about.

Here is the ‘spin axis’ of a golf ball.

You will hear some Trackman fans eschew the word ‘side spin’ because they feel the term indicates that a golf ball can spin two different ways (backspin and side spin). The golf ball has an axis that it spins on. So the Trackman people tend to prefer the ‘tilting of the spin axis.’ Other launch monitor companies will use ‘side spin’ understanding that the ball has an axis and doesn’t spin in two different directions. But, they are essentially figuring out where the axis is tilted and how much the ball is spinning in the direction the axis is tilted creating ‘side spin.’ It’s more or less semantics although I tend to prefer Trackman’s spin axis terminology.

The idea initially before Golf Evolution asked Tuxen the question was that the higher the rate of the closure, the more it would tilt the spin axis in a hook shot direction. And the slower the rate of closure, it would produce more of a slice spin tilt of the ball’s axis.

The idea is that using the D-Plane, where the ball curves based on the path’s relation to the face. So if the golfer had a high rate of closure, the clubface would start closing with relation to the path.

But, with gear effect the Golf Evolution guys felt that the opposite would be true and the ball’s spin axis would actually tilt towards a slice.

First, think of the ball and club face as 2 gears (hence the name, gear effect)

Here is another example illustrating the point: 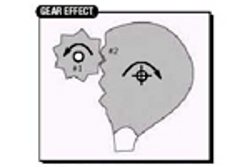 So…for every action, there is an equal but opposite reaction.

What does that mean here?
So…for every action, there is an equal but opposite reaction.

What does that mean here?

Here are how my picks at the Masters finished:


Here are my picks for Harbour Town:


Here are my latest season-to-date rankings:

Here are how my Valero picks finished:


Here are my picks for Houston: