Since I don't have the time to do the PGA Tour rundowns anymore, I decided I would update periodically. These rankings are adjusted according to the difficulty of the course.

If you are a player on the PGA Tour or their caddie or instructor and would like to get a full data analysis of the player, please contact me at ProGolfSynopsis@yahoo.com.

This time of year is when perhaps the most controversial hole on Tour is played, the 10th hole at Riviera. (click any of the pictures to enlarge) 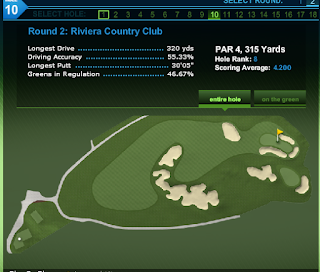 It is recorded at 315 yards, but that is rather generous as you're playing from an elevated tee and usually some thinner air. Essentially, every single player in the field will have the distance to drive this hole.

And many end up hitting it well past the hole. The PGA Tour even tweeted the following:

Yesterday, I recorded the shots and the scores on #10 and here is what I got:

So, given that since 2003, players going for the green played it at a combined 467 under par versus the lay-up players being at 21 under par AS WELL AS the going for it scoring average being lower on Thursday than the laying up scoring average....they should go for this green, right?

Furthermore, 67.5% of the players LAYED-UP yesterday versus 32.5% went for the green.

So, the players must be ignorant for not understanding they should go for the green, right?

The first thing the Tour ignores is that the hole design has changed a little since 2011. So, it's not quite fair to throw out the numbers of going for the green versus laying up since 2003. It is probably best to look at these numbers in 2012 since they made alterations to the hole during this time.

But the far larger issue is the pin location.

Yesterday's pin location was all the way in back. And I would expect it to be in a similar location on Sunday.

But what those statistics do not tell you is how close these players were hitting it to the hole:

That means that players laying up were hitting their approach shots 20% closer to the hole than if they went for the green.

Furthermore, look at the birdie rates:

So, why did the 'Go For It' group of players have a lower scoring average if their approaches were further from the hole?

The main reason is that the Go For It players just happened to putt and hit their bunker shots well on #10 yesterday.

The other reason is that there were some odd players that just fell apart like Justin Leonard who was in excellent position with 79 yards in the left fairway...and came away with a 7. And Leonard has been one of the best on Tour from 75-125 yards (Green Zone) over the years. 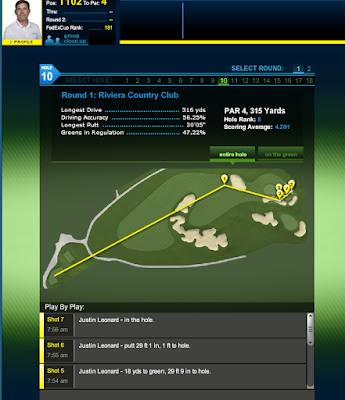 The main issue with laying up yesterday is that there was a tailwind and that helped firm up the greens and also reduced the spin on the approach shot.

Many golfers did what Will Zalatoris did. They hit their tee shot in good position by laying up left. They then hit an approach that was going at the flag, but traveled too far and deposited into the rear bunker. 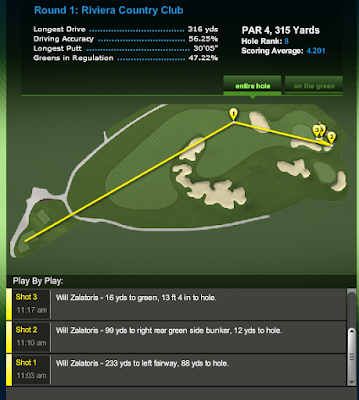 Still, the numbers indicate that laying up when the pin is located in the back is the BETTER play. The reason why the players that went for the green could not get their approach shots closer on average is because the bunkers left of the green block the shot and if you miss in the right bunker, it's a very unfavorable position as well.

Here's how Angel Cabrera played it which was the main theme as to why the Go For It players were able to have a lower scoring average than the lay up players: 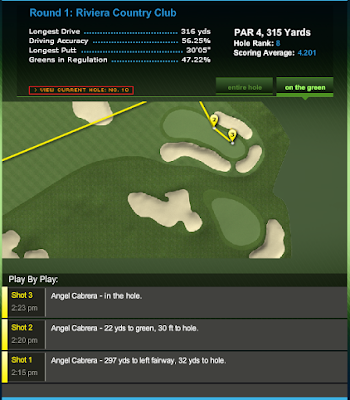 Cabrera actually hit a pretty decent drive, but it went a little too far and was blocked off by the bunkers and had no choice but to chip one to the middle of the green, leaving himself with a slick 30-foot downhill birdie putt. He just happened to make the putt.

Anybody that has read Pro Golf Synopsis or has talked to me knows that I don't favor laying up. But when the pin is in the back pin location the better play is to lay-up off the tee. Keep it left of the right edge of the left fairway bunker, leave yourself about 75-100 yards in the fairway and allow the ball to spin and hold the green. While the scoring average happened to be lower for those going for the green on Thursday, in the end when the sample size gets larger, it should bear out that the scoring average will favor the lay-up strategy.

A while ago I had read an article of how the Cal State - Fullerton baseball team was not using baseball bat donuts because research performed by the university found that the bat speeds became SLOWER after using heavier weighted bats.

Instead, they found that using variable weighted bats that were LIGHTER actually increased bat speed.

There is a company out of Chicago called SuperSpeed Golf that is providing a similar training method. Here's a few videos:

Myth of the Straight Left Arm with the Smart Golf Academy

Here's a great video explaining the myth of the straight left arm. However, as I have shown in other posts many of the great ballstrikers actually have a bent left arm at impact as well.

Gabe Writer on Slowing the Rate of Closure

Video from 'Movement to Improvement' YouTube Channel owner, Gabe Writer, on slowing the rate of closure in order to hit better irons and woods.


You can also se the bent left arm in Jordan Spieth's golf swing:

Here's a video from Chuck Cook showing how to hit a low spinning pitch shot for better distance control while using Trackman:

Thank you for being such a fine representative of the game of golf. You will be missed.

As a golf statistician, I’m often asked what statistics golfers can keep to track their skills on the golf course.

For the tour players I work with, it’s easy. The PGA Tour uses a laser-measuring system called “Shot Tracker” that gives me the raw data I need to help them with their game. For amateurs, it’s much more difficult. They don’t have Shot Tracker, and many golfers who create their own metrics find that it can be a time-consuming process riddled with inaccuracies.

I am constantly looking to create new types of scoring games that are based on sound statistical information. For instance, there was a fad of people using the total distance of putts made metric. The idea was this — the longer the distance of total putts a player made, the better they putted. It does not consider, however, the golfer who putts poorly and happens to make a 60-footer. Nor does it consider the golfer who putts well and leaves himself first putts that are shorter in distance.

I started to look at some other metrics that I thought would be less cumbersome to record when it came to putting. I ran this against the past history of Strokes Gained Putting on Tour and found some interesting results.

AimPoint Express Clinic at Duran Golf Club with AimPoint master Justin Blazer on February 28th. Click the picture to enlarge and read all of the details:

ere's golf instructor, Cathy Schmidt, and her take on how to build your golf swing in stages:

Here's a video from Victor explaining his golf swing in a little more detail.

One of the common fallacies I have heard about Victor's swing is that "you can't teach that!" However, Victor will tell you that he increased his swing speed by 30 mph since high school (he's 20 years old now) and learned how to do this after reading Kelvin Miyahira's work and now works with Lucas Wald on his swing.

Here is the link to the 'Pro You Know' donation page to 20-year old pro and friend, Victor Rodgriguez:

Victor made it to the world finals of the Re-Max Long Driving competition and lost after hitting a 419 yard drive.  However, he is attempting to take his game to the next level as a Tour player.

Victor generates up to 140 mph club speed, but hits the ball amazingly straight.  Having watched him this past weekend at Timacuan Golf Club, he hits world class golf shots with his irons and driver.

The funding will gain Victor more tournament experience and help hone his skills and hopefully qualify for the Web.com Tour.

He is an excellent person as well.  He works for a living and does not have any sense of entitlement.  But, every young mini-tour player needs funding to help them fulfill their dreams which is why the ProYouKnow Web site was created.

Based on my experiences in golf and working with Tour players, I believe Victor has the potential to become a legitimate PGA Tour player someday.