What To Look For: RBC Canadian Open

The third oldest tournament on the PGA Tour, The Canadian Open, comes this week from Glen Abbey Golf Club just outside of Toronto:


Glen Abbey is the most common course played for the Canadian Open. It was designed in 1976 by Jack Nicklaus. Ironically, this is one of the few pro events that Nicklaus never won.

This is a critical event on Tour for many players because the field is somewhat weak since the British Open was the week before. This will allow for some players with less FedEx points to possibly make a large leap in the FedEx standings before the playoffs.

Overall, the course is not that well liked by the players. Most of the strokes will be gained/lost off the tee and on mid-iron approach shots. The par-5’s are critical as well, but they are more about the drive than the 2nd shot.

The par-5 18th is the final critical hole on the course.

In my lesson with GG back in April we discussed some statistical analytics in golf and a little bit of strategy. But, he didn't need much help as most of the stuff I have seen him discuss is on the same wavelength with what the data tends to show.

What I like about this video is the pre-shot routine analysis. Recently the European Tour did some analysis on pre-shot routines and the consistency and time it takes and its impact on performance.

My only issue with the RSM study is that the sample size (20 players over 8 rounds) is questionable at best. But, I do believe that with a more sufficient sample size the main conclusion would be the same.

I also like GG's solution for separating swing thoughts from your round of golf in order to get the golfer to 'play golf instead of playing golf swing.'

I'm a firm believer in utilizing slow motion practice. Not only because it works well at ingraining mechanical movements in your swing. But, I have found that when I'm really in tune with slow motion practice I can get out on the course and play without using swing thoughts. In fact, it's almost like a weird out-of-body experience where I can stand behind the ball, visualize the shot and visualize myself hitting the shot before I actually hit the shot. Golf becomes automatic from there.

The issue is that if you're working on new mechanics and want to play it will take time to get to that level with slow motion practice. So, I really like GG's instruction of making the first practice swing with your swing thought and then 'turn that thought into a feel' on your 2nd practice swing.

Having said that, to me it's not really a 'feel' as much as my braining SENSING how my body needs to move to hit the shot I want to hit.

I remember years ago reading an article and they asked Fred Couples on how he hits a draw on purpose (at that time he played a fade). Couples' response was that he simply visualized the ball drawing in his pre-shot routine and then he simply got up there and hit the ball and it would draw. I used to think that Fred was full of shit and that there had to be some type of actual swing thoughts and step-by-step instruction to do so. But about 20 years later I started to realize that Couples was telling the truth and he was simply sensing what his body had to do in order to produce a draw.

I relate this sensing to watching musicians play a song that they are not quite familiar with.  My sister was an accomplished violinist and occasionally would hear a popular song on the radio and play it with her violin.  She didn't need sheet music or think about what actual notes to play or how he was holding the violin, etc.  Instead, she could hear the music and her brain could sense that if she made a certain movement it would produce the sound she wanted.

The concept of making par vs. saving par also reminds me a lot of what Jim Furyk once said in a Golf Channel Playing Lesson.  Furyk hit a poor drive on a hole and the host asked him what was going thru his mind.  Furyk's reply was there was no reason to get upset and instead he imagined that he was playing from the tee box from that location and it was a par-4 from there.  His goal was to hopefully make a faux 'birdie' (actually a par), but he didn't want to make anything more than a faux par (actual bogey).

In GG's case, saving the actual par was not overly difficult because he did have some semblance of a shot at the green and he didn't have a long ways to go.  But, the concept should stay the same.  Losing your cool on the golf course is understandable and even to a degree, acceptable.  But if it works against you being able to properly focus then it will be a detriment to your score.

One of the main concepts to come away from all of this is that data analytics and psychology in golf are often intertwined.  They operate in a vacuum in golf far less often than people think.  Things like confidence, etc. often produce 'good numbers' for golfers, but playing the odds correctly can often produce a healthy golfer from a psychological standpoint.  And we can use data analytics to measure how things like pre-shot routines can impact performance and then use neurological and psychological experts to give detail as to what occurred to produce those observed results.

It's a bit difficult to decipher Fowler's point as the phrase 'good putting' is not defined by him. My guess is that he believes that the more skilled putters (we'll say that 'more skilled' are the players that finish near the top in Strokes Gained - Putting) tend to out-putt the rest of the field on slower greens.

In that case, it depends on a few factors.

If you were to take the same course and change the stimps, typically the faster stimps favor better putting. The better putters on Tour tend to gain more of an advantage on putts that break more and going from a 9 stimp to a 13 stimp on the same course will mean the putts will have more break.

But, there are a lot of other factors to be considered. Faster greens, be it for Tour pros or amateurs, tend to have a higher make % from inside 20-feet. Faster greens tend to be smoother and thus the make % increases. There’s probably something to be said for having to hit a putt softer and taking a shorter stroke as well. But faster greens also tend to have a higher 3-putt percentage. It’s close to being all or nothing, either make the putt or end up with a longer following putt and increasing your probability of 3-putting.

Having said that, the slower greens, particularly on Tour, tend to be on courses designed prior to 1980 with little or no renovations to the greens. Architects from that era makes greens nearly half the size of modern design greens. Thus, 3-putt probabilities are more likely to be lower due to the likelihood of having a much shorter first putt on average. These architects also favored more undulated green contours and thus the greens could not sustain fast stimps. In a case like Pebble Beach and Torrey Pines, both courses with very low make percentages that the best putters tend to gain the biggest advantage on the greens…they have slow greens, but with some of the most undulated green contours on Tour.

But, if those greens were to play at a faster stimp they would inevitably give good putters a stronger advantage. Thus, it’s really about the size of the break which is a combination of stimp and % of slope. Slow flat greens will not favor good putters more than fast flat greens much less fast, undulated greens.

Noticing that the best putters on Tour tend to putt both types of breaking putts better and don’t have a bias between the two is like noticing that NBA players tend to be tall.

What To Look For: 2018 Greenbrier Classic

The Tour returns to the Alleghany mountains for 8th annual Greenbrier Classic at The Old White TPC course:


The Old White TPC course was built in 1910 by Charles B. Macdonald.  It currently plays to nearly 7,300 yards as a par-70.  It's also still one of the most respected courses on Tour.  It features a lot of square and rectangular shaped greens and the finishing hole is a 177 yard par-3.

The last critical hole on the course is the 616 yard par-5 17th hole.  Despite it being 616 yards, it's quite reachable in two shots.  Here's a look at the cumulative 2nd shots tht either found the green or close to it last year: 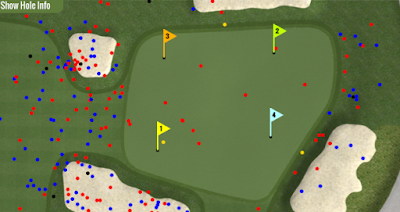 It just requires 2 quality strikes and the big thing is finding the fairway off the tee.

Other than that, The Old White TPC is a long iron and wedge course and often times the winner here is a surprising player that has been striking the irons well all year long, but has failed to get the payoff: