What To Look For: 2020 Waste Management Phoenix Open

Last week, Marc Leishman found his way back to the winner's circle with a victory at Torrey Pines:

Leishman was at 50/1 odds to win and ranked 31st in my list of probable winners.  If you read 2019 Pro Golf Synopsis you would know that Leishman ranked 1st in Red Zone Play (175-225 yards) in the 2018-2019 season.  His struggles off the tee were due to his strong right miss bias and it appears he has worked that out.

This week the Tour comes to stadium golf with the famous 16th hole:

Personally, I love the scene.  It goes against golf's nature, but the scene is something to behold and there's nothing wrong with it happening once a year.

In fact, if every tournament had this...while against golf's nature...it would be good for golf in the long run because it means more people are watching golf and more people will get interested in the game and supply their discretionary income towards the game.

But, what's funny about the tournament is that the 16th hole is a very bland hole and the course isn't very well liked by Tour players.  But the atmosphere is off the charts and that makes Tour players want to play the event.

The old design greatly favored bombers and players that hit it long could just bomb it anywhere with little recourse.  The re-design got a bit goofy for my tastes, but it took the reckless bombers advantage from them and made it more of an irons play golf course

You may also recall from 2019 Pro Golf Synopsis that TPC Scottsdale is one of the courses where players playing the event from the previous week have one of the largest drop-offs in Strokes Gained - Putting.  Thus, I would be a little averse to taking a player that played Torrey Pines last week.

Here's a look at the weather this week:


While the 16th hole gets all of the attention, the 17th hole is far more critical in separating the contenders from the rest of the field.

The most difficult location will be the back left location. 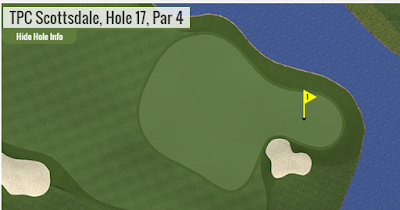 However, it's still a very low scoring hole and the back left location is only slightly more difficult than the other pin locations.

What To Look For: 2020 Farmers Insurance Open


Landry is an interesting golfer as he finished in the top-10 in both Driving Effectiveness and Strokes Gained – Putting in 2016, but failed to keep his Tour card due to performing poorly in virtually every other metric that season. He then regained his Tour card in 2018 and I projected him as one of my Players on the Rise in my annual GolfWRX column (http://www.golfwrx.com/453676/pga-tour-players-on-the-rise-and-the-decline-in-2018/) and he ended up winning at Valero that season, a tournament that I had him as one of my picks to win, at 150/1 odds.

His iron play and short game around the green improved greatly while his driving and putting dipped slightly in 2018 and he was able to have an excellent season finishing 36th in FedEx points. Then in 2019 he became a pretty good iron player overall but started to see bigger declines in his putting and driving and his play dropped even more as he finished 96th in FedEx points.

This week the Tour heads to the longest course on Tour, Torrey Pines.

Torrey Pines was built in 1957 and designed by William Bell. Bell built a lot of famous golf clubs in Southern California and you can see the influence he had on course design in the area just like the influence that Donald Ross and Robert Trent Jones had on Upstate NY golf courses.

Torrey Pines is owned by the city of San Diego. Residents of San Diego can play the course at very inexpensive rates of less than $50. Non Residents are looking at somewhere of $150+ for a round of golf.

Here’s a look at the weather forecast via Weather.com:

Humidity is expected to be fairly high in the 70% - 80% range. That should negate the effect of distance loss due to the weather being cooler. Distances off the tee will be about how firm the course is, but Torrey is one of the lowest hit fairway % courses on Tour and thus the ball will not roll as far on many of the holes.

It’s a long approach shot course that requires good driving and good play with the 3-wood.

The last critical hole on the course is the last hole…the 18th. It’s a hole that can play to 570-yards as a par-5, but last year they played it to 540 yards, making it much more reachable, particularly with a tailwind coming from the south.

It’s a very birdie-able hole if the golfer can hit a good drive in the fairway. But, players tend to get antsy when they hit a good drive that finds the rough due to the water in front of the green.

A shot in the rough can also make the lay-up shot more difficult. On Sunday they will place the flag in the front left location. 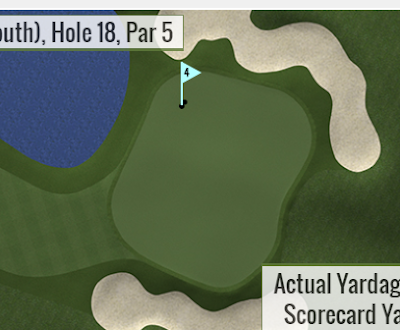 Players hitting wedge approach shots from the fairway will need to land the ball past the hole and then have it spin back to the hole. If the ball does not land far enough past the hole on the front-left pin location, the ball could easily spin back into the water.

If a player has an approach wedge from the rough, it’s almost impossible to get the ball close to the hole on that front-left pin location.

What To Look For: 2019 American Express

The Tour returns to Palm Springs for the American Express, formerly the Bob Hope Classic:

As the Bob Hope Classic it was a nice, little, quaint event.  It didn't have the star power in the Pro-Am like Pebble Beach, but it always felt visually appealing as usually the weather cooperated.  It just seemed 'pleasant' unlike Pebble Beach where vicious wind and rain could make the event look miserable to play in.

Hope was a golfing fanatic known for having a hook.  Here's some footage of him playing back in the day:

They should refer to this as a 'shootout' as that is what it will be with this being usually the lowest scoring event on Tour.  Not a lot of Red Zone (175-225 yards) shots and more Yellow Zone shots (125-175 yards).  To top things off, it usually has the nearest proximity to the cup from the Yellow Zone and on shots around the green.  The greens are fairly flat and very receptive and it's pretty wide open.  It's about who can get hot with the irons and the putter that can win.

Too many different courses to come up with a critical hole, so I will pass on the analysis this week:

The Tour returns to Waialae Country Club for the 2020 Sony Open:

This is one of my favorite times of the year for the Tour as the ‘offseason’ is officially over and you can only dream of what it would be like to be a Tour player that gets to play Kapalua, Waialae and then Palm Springs in January. Then they are off to Torrey Pines, followed by the hoopla and ballyhoo of stadium golf in Scottsdale. It’s also a time of the season and with the course designs where unknowns and journeymen that get rejuvenated tend to flourish or a top player can establish their dominance for the rest of season. And given that this is a Ryder Cup year, it all becomes even more important.

Waialae Country Club is located in the south eastern part of Honolulu. It’s a Seth Raynor design playing to a par-72 and roughly 7,125 yards. It routinely has one of the lowest hit fairway percentages for the field as the average will hover around 50%. This is due to narrow fairways (roughly 26 yards wide) and the wind. Since it’s a Raynor design, there is quite a few tee shots that force the golfer to lay-up off the tee.

Despite the low hit fairway percentage, the average hit GIR % is around 70%. The greens are fairly receptive and if the golfer can find the fairway, the approaches are not overly difficult.

There is a polarizing opinion on Tour about Waialae. Many players love, others hate it. From the vibe I’ve received about the course is that those that don’t like it feels like it favors the shorter hitters too much and there’s too much luck involved due to the wind and narrow fairways. Those that love the course seem to really love the old-school design flavor to it The other factor in all of this is the expense and experience of Hawaii. It’s a pricey trip to make to Hawaii, but others will embrace it and bring their families over.

Waialae is mostly about the versatility of approach shots in terms of being able to precisely hit wedge shots as well as mid-length approach shots. Driving is also important here, but good luck in projecting who will drive well here given the wind and narrow fairways.

The last critical hole on the course is the par-5 18th hole.

Last year the hole played to 4.51 strokes on average. This was despite the field only finding the fairway 29.8% of the time. The big key is for the player to hit it at least the distance that is between the right fairway bunker and the 2nd left fairway bunker. That is roughly about 285 yards. Players that the ball to that distance, even if they found the fairway bunker, saw their projected scores drop dramatically.

Using The 65/50 Rule as described in 2019 Pro Golf Synopsis (purchase here 2019 PRO GOLF SYNOPSIS), the target off the tee for the average Tour player should be just left of the tree that is highlighted by the yellow box. With rollout, it’s easy to see why the fairway is often missed on this hole. 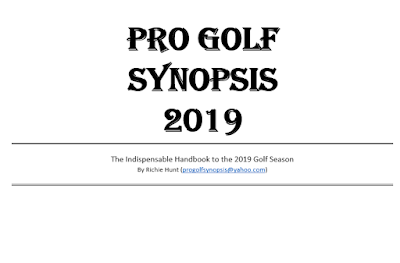 The book is available for purchase by clicking the link below:

Pro Golf Synopsis is the Moneyball Approach to the Game of Golf and the indispensable to the 2019 Golf Season.  It has 354 pages of valuable information and statistical insight involved with the game.

This year's version of the book has detailed findings from launch monitor research data collected from low handicaps and Touring professionals over the past three years.  It also involves a new Statistically Based Golf Strategy to help golfer's better prepare their rounds and lower their scores.

There is also the 188 player-by-player analysis of the 2019 season. 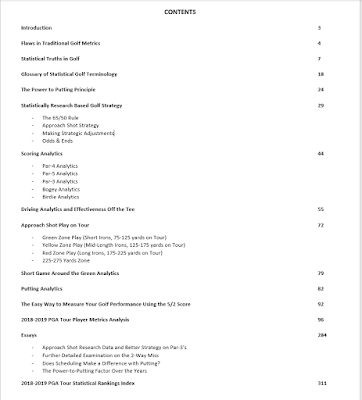