2017 Pro Golf Synopsis is now on sale for $10!  Please click the following link to purchase the e-book:

2017 Pro Golf Synopsis provides statistical research and advanced analytics data on the game of golf to help golfers of all levels as well as to provide information for fantasy golf players.

The latest edition of Pro Golf Synopsis is 315 pages long with five essays on statistical research and individual player analysis of 190 PGA Tour players from the 2016-2017 PGA Tour season.

Here's a link to the Table of Contents.

Here’s a couple of my most recent swings:

But other than that I hit the ball lousy.

I was experimenting with a few things with my setup and I was getting more laid off at the top than usual. In this swing, I tried to feel like I was getting the shaft more vertical to prevent getting laid off: 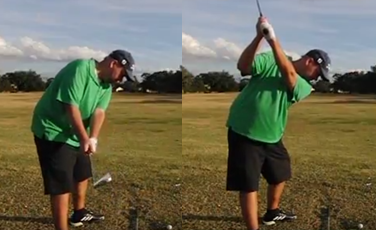 Despite this swing video being taken on Sunday, I’ve already made some pretty big swing changes that I think are helping me do what I want to do in the swing. Essentially, I’m looking for the following:

1. A little shallower with the shaft plane at p5

2. Getting rid of the early Right Pelvic Tilt in the downswing

3. Avoid the right femur/right hip internally rotating too early in the downswing

4. Avoiding that linear push-off from the right foot and creating more of a ‘rotational pulling action’ with the left side of the lower body

5. Get rid of that downward neck tilt in the downswing.

But, I do feel the changes I’ve made are onto something as when I take a ‘good swing’ my results are better than my ‘old good swings’ as I’m hitting the ball further with a better launch direction.

My next Swing Journal post will show the changes I've made in just a short period of time, why I made those changes and how I made them so quickly.

2nd Graders React to Francis Ouimet Winning the US Open

Great video of 2nd graders watching The Greatest Game Ever Played and reacting to Francis Ouimet winning the 1913 US Open.

Some Thoughts on Hip and Pelvic Movements in the Downswing

I was watching some golf videos and I stumbled across this video from George Gankas:


Go to the 3:00 minute mark and I think George has a great way of describing how the trail leg and hip action should move. This is where you see a lot of the sliding of the pelvis and thus thrusting of the pelvis (i.e. goat humping/early extension) occur. The golfer uses the trail leg in a motion to push their lower body in a linear fasion instead of using their lead leg/lead hip to PULL the lower body in a rotational fashion.

I started to see this in my own swing and have noticed something that I had not seen before. 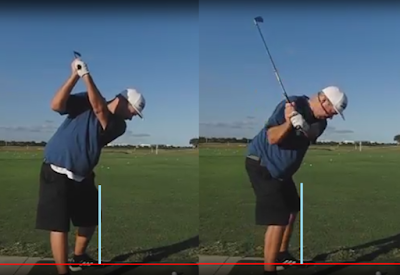 And here’s the same line at p5 (left arm parallel to the ground). Notice how the left knee has only slightly moved off that blue line. 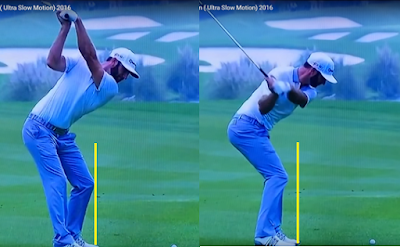 And let’s compare that to Moe Norman, known for sliding his body quite a bit in the golf swing. 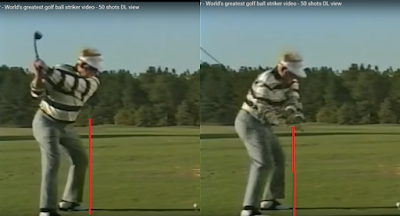 One of the things Moe said was ‘you gotta sit in your golf swing or you can’t do it.’ And that pulling and rotating of the left hip simulates a sitting motion.

Of course, Moe is a little past P5 due to his short backswing and Snead is just before P5 due to the camera speed. But, the picture shows a major difference in their hip, femur and pelvic motions in transition.

This pulling back motion from the lead leg and hip prevents the right leg and right hip from internally rotating and thus the linear ‘push off’ described in George’s video does not occur. That linear push off forces the arms to pull down and that causes the shaft to get a little too steep. 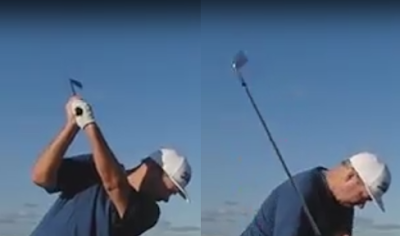 To me, I think it is so critical for golfers to be able to avoid that push off with the rear leg and foot in transition. Some can get away with it, but most cannot. It's an understanding and awareness that the lead leg/lead hip almost moves separately in transition from the rear leg/rear hip. And if well executed, it will mean that the rear leg/rear hip will be propelled into movement by the lead leg/lead hip's rotational movement.  I try to visualize my right leg/right hip being 'frozen' while my left hip and left leg rotate so much that it finally forces my right leg/hip to rotate and move inward.

Here's a video from Andrew Rice discussing how golfers that hit the ball too low or too high with their wedges can deliver their wedge swings with the right amount of loft.