Back at this year’s PGA Championship, Ernie Els was shown on the range with this swing training aid, called the Right Angle Training Aid.

I think most of us understand why Els was using this training aid. He’s trying to get his arm to bend at the elbow at a 90* angle at the top of the golf swing. This folding and un-folding of the right arm in the golf swing is referred to as the #1 Power Accumulator in Homer Kelley’s ‘The Golfing Machine.’

It’s not called ‘#1 Power Accumulator’ because of its importance, but just the way that Mr. Kelley happened to number that motion. The folding of the right arm is the loading action (loads up the power) and the subsequent straightening and thrusting of the arm is the unloading action (unloads the power).

If we do not fold the arm enough, we are not make enough use of the #1 Power Accumulator. But what happens if we over-fold the right arm?

A bunch of things that we don’t want can happen when we over-fold the right arm. But let’s start off with the some simple concepts that most golfers strive for.

1. We want to ‘stay on plane’ to hit powerful and accurate shots on a consistent basis.

2. We should want to have our shoulders turn on a 90* angle with a relation to the spine.

And in reality, #2 helps make it easier for golfers to ‘stay on plane.’

In fact, for the Stack and Tilt detractors out there, #2 is what the S&T is much about. Other components of the S&T that they prefer to teach their students, like the inside hand path in the backswing, turning the left shoulder downward in the backswing, etc., those are done in part to keep the shoulders turning at approximately 90* to the spine. What’s important to understand about these particular components is that most amateurs do not have their hand path going inside and do not turn the left shoulder downward, thus they usually have their shoulders turning too flat, rather than turning at 90* to the spine.

I will get back to the right arm and the shoulders turning at a right angle to the spine in a bit. But one of the main issues with over-folding the right arm is that the golfer will wind up with too long of a backswing for what they can probably handle.

I’ve stated this before, shortening a backswing doesn’t guarantee more accuracy. As shown by this swing by Sam Snead, one of the greatest ballstrikers of all time.

Conversely, shortening your backswing doesn’t mean you will automatically hit it shorter. Take a look of the swing of David McDaniel, who is hitting a 9-iron here, 160 yards.

Getting back to the ‘staying on plane’ point, one of the main problems that golfers with a long backswing can struggle with is that they will ‘get off plane’ in the backswing. Thus, they will need to figure out how to get back on plane in the downswing, which is known as a ‘compensation.’

It’s not that one cannot make compensations and be an excellent ballstriker. Hogan had his fair share of compensations himself. The issue that most golfers have with compensations is that they do not have the timing nor the time to put in the practice in order to groove the adjustment they need to make. In other words, because of their compensations, they’ll have to rely more on timing and hand-eye coordination in order to strike the ball consistently well.

But many golfers will stay on plane at the top of the swing even if they over fold the right arm. However, on the downswing is where they often run into trouble and troubles in the downswing are more important.

However, in order to get to a similar impact position like Snead’s picture, the right arm needs to thrust/straighten out on the downswing. If it doesn’t do that enough, then we never get the Snead type look. Here’s a pic of forum poster gmbtempe right before impact.

This position, often call the ‘P-6’ postion, where the shaft is parallel to the ground in the downswing before impact, is a great way to tell how much the right arm is straightening in the downswing.

Also note from the Face On view that his hands are behind his right leg. Put that in comparison with Boo Weekley at the p-6 position. 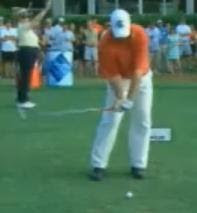 As you can see, Boo’s hands are much more forward at this point in the swing.

The reason being is that Boo’s right arm has straightened out more.

Also note that gmbtempe’s shoulders are very closed at p-6. That’s because his hands are further back (which is due to the lack of right arm straightening/thrusting).

You can try this yourself. Take a club and go to the p-6 position yourself. Move your hands so they are about where the middle of your stance is. Now move those hands backwards. Now look at your shoulders, they will be closed. Move the hands forward and the shoulders become more square and eventually open.

Golfers often want open shoulders at impact, but instead of trying to actively pivot the shoulders, they need to realize that the right arm has to thrust in order to help those shoulders get open.

So, what does that have to do with over-folding the right arm in the backswing?

If you over-fold the right arm on the backswing, the rate at which you thrust/straighten your right arm will not be fast enough to straighten out the arm enough coming into impact.

This can lead to another compensation.

If the right arm is not straightening enough in the downswing, eventually a golfer will subconsciously figure out how to get the clubhead to the ball. Because the bent right arm shortens the length of the distance between the right shoulder and the club head, the golfer will likely make the compensation of turning their shoulders much steeper than 90* to the spine in order to get the clubhead to the ball. As shown here:

Now, if you straightened out the right arm enough and had your shoulders turning much steeper than 90* to the spine, you’d hit well behind the ball. But since the right arm has been over-folded at the top of the swing, you make a series of compensations in order to hit the ball.

I wouldn’t endorse the Right Angle training aid because I think it provides resistance which could wind up increasing the golfer’s tendency to over-fold the right arm. I would suggest being very conscious of the right arm fold while on the range and then the unfolding in the downswing.

Though I believe the folding of the right arm and the way the #1 accumulator loads and unloads is very important I believe there a couple of things that are misleading here and there are other contributing factors than simply what the right arm is doing.

First off, did you mean to say the right arm must straighten and thrust, or do you mean it must straighten and thrusting is simply one of the mean of activating the straightening process. I mention this because Thrusting is a hitting technique, while both swingers and throwers can experience the straightening of the right arm without thrust. They can thrust as well for a hybrid action, however pure swinging is performed without thrust and some throwing actions have thrust while other no thrust.

Secondly, the over folding of the right arm in the backswing usually has more to do with being more armsy to begin with, while being combined with poor posturing, and lack of depth will too much width and height activities in the back stroke. Golfers that overfold with proper depth, width, and height blending will be on plane and need less compensations. Additionally, golfers that turn more than 90 degrees with their shoulders will often overfold and still be able to manage the slotting and planing activities without compensation.

Golfers that have more dynamic and dominant pivot actions will tend to fold less because there is less need to in the department of generating more power.

Golfers with poor pivot activity seek more arc and often do so with the armsy travelling longer. And the arms need to overfold to do so.

Additionally much of the downstroke shoulder tilting you are talking about tend to happen more because of the hips moving toward the ball in the transition instead of stay back. Another poor pivot action. The shoulders tilt to move the club into the width direction since the poor pivot eliminated the width direction. This is why many instructors prefer the golfer to slide their hips toward the target when the backstroke has generous height dimensions.

As far as the right arm straightening more to get infront of the body moving into the p-6 position as you show that relates to the golfers linkage alignment. Biomechanically there are 3 possible linkage options, rear linkage (the marry the right arm to the right side version), center linkage as you show with Boo and front linkage that links up in front of the front leg before delivery. Rear linkage golfer simply need more turn to bring the hands in front of the ball moving past p-6 and will tend to me more open at impact. Center linkage golfer will sense the body waiting for the arms to get in front of the body coming down before they fire the body through impact (much like Tiger has mentioned in the past), and front linkage golfers often feel the body backing into p-6 as the arms move into the linkage alignment. And all those actions can be performed without thrusting the right arm into a straightening action.

Basically right linkage golfers will have a more bent right arm in p-6, center linkage less like Boo, and front linkage even a straighter right arm. So it is ok to have more of a bent right arm if the golfer owns rear linkage biomechanics and has better rotation into the p-6 alignment.

Just some thoughts to throw your way. Please feel free to visit my blog www.newhorizonsgolfblog.com and my youtube channel eagolfpro to get some more background info of what I am saying and would certainly entertain you comments as well.

Golfers often want open shoulders at impact, but instead of trying to actively pivot the shoulders.