A while ago I purchased the Putt Out putter training aid. Here’s video promo from Putt Out describing the training aid:


I got my PuttOut training aid from the PGA Tour Superstore for $29.99. Since I got back into the game in 2009, putting has no longer been a strongsuit of mine. I have found that I can putt well in competition if I adequately prepare myself. But it really starts with nailing putts from 3-6 feet for me. I have a tendency to run real hot or cold from that distance whereas putting from say 10-20 feet my deviation in performance is much narrower.

What I like about the PuttOut is the ease of use. It’s very light and small. You can fold the PuttOut and even store it in your golf bag. It’s main purpose is to use at your home or office. They do have a mat that can be rolled up to give a smoother surface and a projected 10 on the stimpmeter that retails for $89.99. Granted, the ease of use is not a main priority for me when it comes to a putting training aid. I am looking for something that will turn me into a better putter. But the PuttOut’s ease of use is certainly a selling point for the product. It’s not a pain to set up, it’s not too big or too heavy or complicated to assemble.

As far as the purpose of what it was supposed to, I will start out with the ‘roll back’ feature. This is where the ball rolls up the ramp (on a presumed ‘made putt’) and comes back to the golfer. I generally found that the ball will roll back about 18” to 24” from the hole when I was putting on my carpet. I was putting on a fairly normal carpet, so more plush carpets would result in it rolling back less and more firm, fire-retardant type carpets would allow for more roll-back. In the end, I would reach for the ball with my putter and bring it back to where I was putting from. There are devices that shoot the ball back to you, but they are a bit cumbersome as well. Overall, the roll back feature wasn’t that great.

I often get asked ‘what does the Tour data show is the distance I should practice from?’

Well, there are a couple of ways I look at the data.

Here’s a chart showing the correlation of make % from specific distances on Tour and its correlation to the player’s Strokes Gained – Putting for the last 5 seasons (2013-2017): 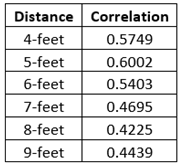 The other way is to look at the data compiled by the Tour and Dr. Mark Broadie:

In fact, here’s a chart showing the drop-offs: 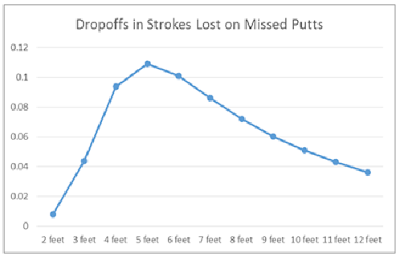 What does this mean?

So, what does that have to do with the Putt-Out training aid?

If the aid is meant for putts around 4-feet long…then they are on the right track in terms of what golfers should work on. The data suggests that 5-footers are more important, but in general the average golfer cold probably work on putts from 4-6 feet and I don’t think moving back a foot or two with the Putt-Out defeats the purpose and use of the training aid.  Also, since the Putt-Out is more focused on speed control, I think that's the right thing to focus on for 4-6 foot putts.  As I have talked to numerous putting teachers about golfers that struggle on short putts...usually it's a speed control issue and usually the golfer is hitting putts too hard and trying to 'take the break out of the putt.'  With the Putt-Out, you can certainly 'make' putts by ramming them in, but you will not get the ball to stick on the perfect speed putt hole.

I think the pricing point could be a little lower, but avid golfers can get great use out of it and beginners could be really helped by the speed control visual the Putt-Out provides.

My understanding is that the Putt-Out will only return the ball as far as it would have gone past the hole if you missed.

From the website -
"With a scientifically shaped parabolic ramp, each made putt is returned to the player the same distance it would have gone past the hole had it missed, anything else is a miss."

So, for me, I get feedback on a) did I make it and b) what was my capture speed?

Oh, I didn't know that. Thanks for the info!