I had actually written up this post last week and was scheduled to post it up today, but I started to read some articles and videos on David Orr’s Flatstick Academy (http://flatstickacademy.com) and I believe I’ve made a major breakthrough in my putting.

Contrary to popular belief, I’m not very technical or mechanical when it comes to golf. I’m very feel oriented (as I believe every golfer is) and I like details (which I don’t believe every golf cares for). It’s very important for me to not only figure out what to do going forward, but to determine what I did poorly in the past, what I did well in the past and what I did ‘in between’ in the past and why. When I get all of that information, I start to improve by leaps and bounds and start to ‘own’ what I’m doing. I have hopes that I have finally figured out many of those things I did with my putting stroke in the past after coming across some of the articles on David’s site.

First, let’s take a look at my SAM Puttlab report that I did with John Graham back in January. I was using a custom Edel putter during this time and rarely practiced my putting. This stroke was awful: 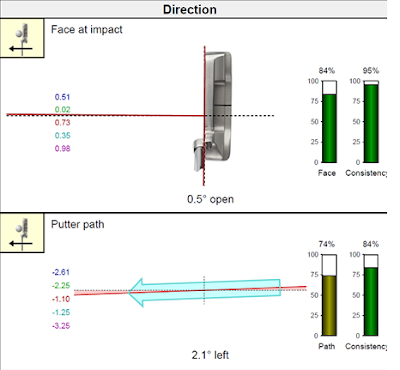 At the time, I thought the stroke was awful because it was going left with an open face. But, the stroke is more awful because of other things which I will get to. I will not try to give away what is on David’s Web site, but I learned that this is a similar stroke pattern used by many great putters like Jimmy Walker and Loren Roberts.

Here’s my report in October with the Edel Torque Balanced Putter (which I aimed at address much better). 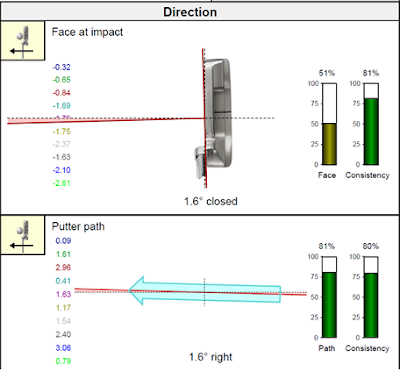 So, we see a very different putter path, going from 2.1 degrees to the left in January to 1.6 degrees to the right in October. That’s a change of 3.7 degrees in 10 months. The face is now closed as well. The consistency is down a bit when it comes to face impact and putter path from January. Although overall the stroke in October was FAR BETTER (again, overall) than it was in January. 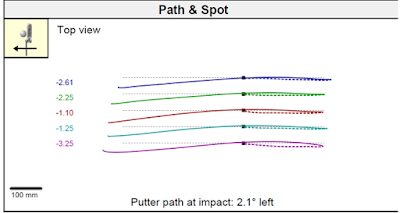 The dashed line represents the backstroke. The straight (un-dashed) line is the thru-stroke. As we can see in January, the backstroke is very much going back down the line without much of an arc.

Here’s the stroke from October. 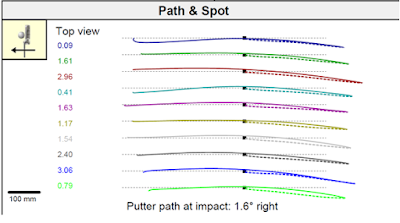 Here was the timing of the stroke back in January:

I feel the key numbers are backswing time and time to impact. That is the time it takes to go from the address position to impact. It depends on who you talk to, but the general consensus is the Tour average is about 1.0 seconds (or 1,000 milliseconds) to go from address to impact.

Here’s the timing of the stroke in October.

As we can see, the stroke gets a little quicker in October by about 45 milliseconds.

But the real key is the acceleration profile.

Here’s a diagram that Erik Barzeski (www.thegolfevolution.com) created a while ago to show what poor versus good versus great acceleration profiles look like:

You can find the rest of the fantastic article by Erik here: http://thesandtrap.com/forums/topic/74295-putting-do-not-accelerate-through-the-ball/ 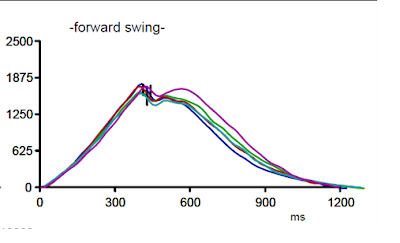 Roberts has a funny stroke because he hits the peak acceleration and speed before impact pretty clearly and then accelerates again well after impact. But that’s because he has a very long and very slow putting stroke. In order to keep the follow thru as long as Roberts does, I believe he has to re-accelerate after impact. Probably tough to do, but all that matters is that he hits peak speed and acceleration prior to impact. 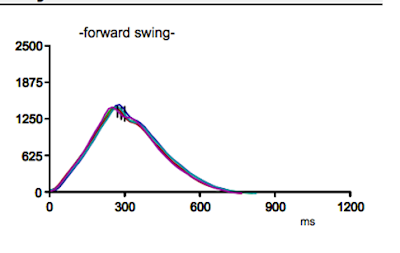 Again, peak speed and acceleration prior to impact. And Tiger and Roberts have 2 completely different strokes. Tiger has much more arc and face rotation and is far quicker than Roberts’ stroke. 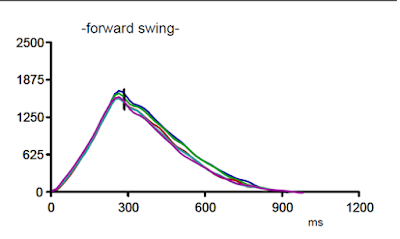 I believe Azinger was using a belly putter on this stroke.

Here’s my awful stroke in January: 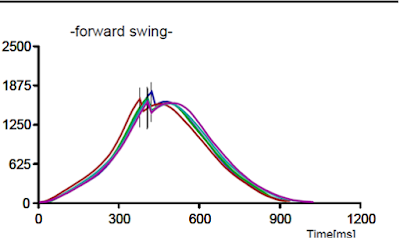 So, I worked on that diligently and later on started working with the Pelz Putting Tutor. And here’s my acceleration profile from October: 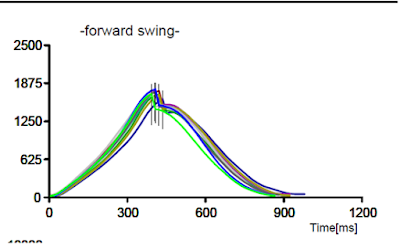 This is far better than it was in January. I would label this as somewhere between Barzeski’s ‘poor’ and ‘good.’ Still, it bothered me that I could not get the peak speed and acceleration prior to impact.

That is when I started to read David’s articles on cataloging putting strokes by how the golfer powers the stroke. I feel David’s work is about getting the arc and the face rotation to come close to matching (wider the arc more face rotation is needed) and having compatible biomechanical and neurological pieces to the corresponding arc and face rotation.

So thru reading the articles and watching the videos on David’s site, I started to piece together what went on:

- When I was a very good putter in college, I utilized a ‘lead side’ stroke that had compatible pieces to it.

- Eventually I started to read too much and listen to too many people and thought my backstroke needed to have more arc (and therefore more face rotation).

- I thought that I needed to get the face angle more square at impact (in January it was 0.5 degrees to the right)

- In January, I started to work on speeding up my backstroke in order to allow ‘gravity to do the work’ which is ill-advised with a lead side stroke

- I then started to use my lead hand to make the backstroke and used the trail arm to make the thru stroke, but over time I was starting to use more of my trail side to make that backstroke (more compatible). This produced a better overall stroke and a better acceleration profile. And the stroke started to resemble what you see out of trail side strokes (cataloged on David’s site).

So, how does that relate to finding my Billy Baroo?

David talks extensively about putters and their designs which includes things like head and hosel design along with weight and length and I can now see why I prefer a putter that felt heavier the shaft and why I putted well with the Ping B61 (head shape) and the Wilson 8802 (hosel design and shaft to head weight). And why I started putting so well with the Edel Torque Balanced putter. I went decided to switch back to the lead side stroke on Friday night and worked diligently with the Pelz Putting Tutor and on Saturday that was the best I’ve putted since July.

I hope to get another SAM Puttlab report, this time with the lead side stroke up soon.

If you need your ex-girlfriend or ex-boyfriend to come crawling back to you on their knees (no matter why you broke up) you got to watch this video
right away...

(VIDEO) Have your ex CRAWLING back to you...?