I am pleased to announce 2012 Pro Golf Synopsis, the ‘moneyball’ guide to golf strategy and game analysis, is scheduled to be published in December. I will have a store Web site where readers can download the e-book in a .pdf format for only $10.

The 2012 version of Pro Golf Synopsis is a new format which is very clear and easy to read. It will include 3Jack Golf’s up-to-date statistical research findings and analysis of what goes into the game of golf and why golfers shoot the scores they shoot. It is a book that is useful to every type of golfer, from the PGA Tour professional to the 30 handicapper looking to shoot lower scores and to better understand what goes into shooting lower scores.

2012 Pro Golf Synopsis will also include a statistical analysis of each of the PGA Tour players whom qualified statistically for the 2012 season along with 4 essays related to statistics and the game of golf and much more.

I will be offering a free analysis for PGA Tour players or their instructor and/or caddies for any player who qualified for the 2011 or 2012 season statistically. This will be a statistically detailed overview of their game along with my analysis based upon those statistics in order to improve their earnings. I provided this analysis for a few current PGA Tour players this season on a bi-weekly basis. One of my clients on Tour saw his earnings nearly quadruple from 2011!

If you are a current PGA Tour player, caddy or instructor and are interested in this free overview, please e-mail me at Richie3Jack@yahoo.com.

Here are some samples of the 2012 Pro Golf Synopsis:

In part, this is why so many of the top tier Tour players hit the ball a long ways. Distance and power have an inherent advantage to a degree because the longer a golfer can hit it, the more likely they will leave that tee shot closer to the cup and that will increase their odds of hitting the subsequent shot closer to the cup.

However, that does not mean that power will always win out in the end. In fact, my Advanced Total Driving metric which determines a player’s effectiveness off the tee, is a proprietary formula that considers longer players more effective off the tee, but ‘penalizes’ them for missing more fairways and having a greater distance to the edge of the fairway on tee shots that miss the short grass. Furthermore, my zone play metrics determine the player’s ranking by their proximity to the cup over conventional methods like greens in regulation.

Danger Zone play and putting is where the largest gaps in getting the ball closer to the cup on the following shot exist for the lower handicaps (2 handicap or better). For the higher handicaps, there is an inability to consistently hit tee shots in a position where they can hit the subsequent shot closer to the hole. For some golfers it may be a case of having driving accuracy and precision inefficiencies. For others it may be a lack of power. But for the majority, it’s a combination of all three.

This is not to say that parts of the game do not matter. In fact, it’s just the opposite. Every part of the game matters to some degree. But, Pro Golf Synopsis is designed for players to more accurately prioritize what parts of the game have a greater influence on their score and to better understand what goes into posting lower scores so they can practice and strategize more effectively

The largest change in the Tour has come from the level of importance from off the tee versus on the green. The statistics show that as far back as only 1980, driving played a much bigger role in a player’s success on Tour compared to putting.

My theory behind the reason for this boils down to a few factors.

Driving the ball effectively off the tee is still very important. But, putting ability has now increased its correlation to success on Tour while driving effectiveness has decreased its correlation on Tour. This has come to the point where putting is now of greater important than driving effectiveness on the Tour. I start to wonder if it will get to the point where 30 years down the road putting will be the most important factor to success on Tour above all else. 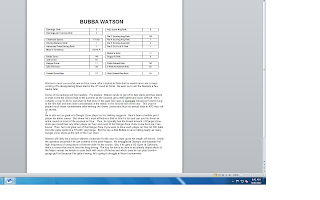 Professional trading signals delivered to your cell phone every day.

Start following our signals NOW & gain up to 270% per day.