Here’s a look at my wedges: 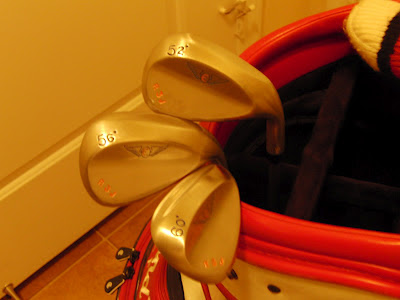 How important are wedges? At my level of play I believe they are more or less, moderately important. My statistical research shows that wedge play is vastly overrated on the PGA Tour. The idea that Tour golfers ‘get up an in every time they have a wedge into the green’ is patently false. In reality, the better Tour player may get up an in with a wedge in their hands (full swing) about 10-20% of the time. Also, Tour players do not get a lot of approach shots from the Birdie Zone (75-125 yards) in a round of golf. Some golfers, even the longer hitters, will not get an attempt from the Birdie Zone all tournament long. And one of the popular misconceptions is that long players are in the Birdie Zone more often. The Birdie Zone usually gets most of its attempts from the shorter players because they wind up in the Birdie Zone more often on par-5’s than the longer player, like a Bubba Watson, who goes for par-5’s in two shots about 75% of the time.

As I’ve said in my 2011 Pro Golf Synopsis, it’s not about labeling a part of the game as irrelevant. If you improve any part of your game, over time it will affect your scores. It’s about determining the level of importance and figuring out what you need to improve upon.

With wedges, I’m actually much more concerned with their performance around the green than on half swings, three quarter swings and full swings. That’s because statistically, the shots from 0-20 yards from the edge of the green mean more to your scores than a full swing wedge.

I believe that the best wedges will help you perform well on the basic shots around the green. Like the chip, pitch (all trajectories), flop, lob shot (vertical hinge type shot), bunker blasts, etc. Where one can really start to see an advantage is on the more difficult shots around the green, like thick rough lies, hardpan, tight muddy lies, long bunker shots, etc. Those are usually the shots that get golfers of my skill level and can absolutely kill a good round for a higher handicap golfer. 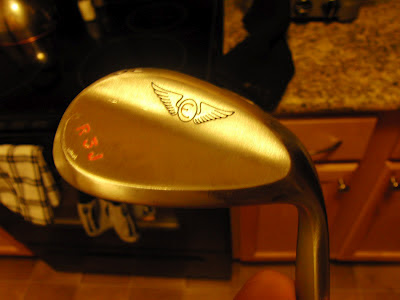 The biggest trend in equipment today is customization. Everything from the specs and components down to engraving,finishes and paint fills. I think the one part of the game that is still untapped is the wedge market and with companies seeing some of the success that Scratch Golf and Miura have had, if Edel Golf has success as well I believe other companies will start to follow suit and come up with their own customization and fitting for wedges.

Edel’s customization starts with finding the right head grind and bounce angle combination for the golfer. Edel utilizes a fitting cart with all sorts of wedge heads that have different grind and bounce angle combination. The idea is to find the right combination of grind and bounce so that the golfer can hit it ‘flush’ without taking a massive divot. The main idea came from Mike Adams’ research that golfers would ‘hang back’ on the downswing with wedge shots because if they didn’t, they would stick the clubhead into the ground. I believe one of the greatest advantages that this system has is that it allows for better distance control because my divot pattern and size of the divot is more consistent and very small. So I don’t have to worry about losing clubhead speed if I catch one heavy or worry about the launch angle due to the clubhead and turf interaction.

For those non-Edel wedge golfers, I will say that growing up playing golf, bounce was often overlooked and usually the adage was that better players needed less bounce. I think that if you want to become a better wedge player, you need to understand bounce better and not be afraid to experiment with higher bounce angle wedges. A lot of this depends on your swing and the turf you are playing off of.

When I came to Florida, I was usually told that a golfer needs less bounce to deal with the thick Bermuda grass. But in the end, I noticed that to the opposite case. Now, I can hit Edel wedges really well off of hardpan as this video shows.

If you’re hitting off of dry, hard ground more often, like you may see in Texas or Arizona, then you may want to seek a lower bounce angle because some of the higher bounce angle heads, may not have the grind design to help hit shots well from those type of lies.

Each loft is designed to change how far the golfer can hit the ball. As I have mentioned in the previous parts, I typically like to carry:

Of course, that begs whether or not I ever use the 52° wedge. My feeling is that the 3-iron is more important to me than the 52° wedge because if I’m ever in a position where I don’t have a 3-iron and I need it, that will potentially be more hazardous to my score than needing a 52° wedge when I don’t have it.

It’s MUCH more difficult to get the distance right and still hit an accurate shot when I have to either step on the gas with a 4-iron or take something off my hybrid than it is to either choke up on a PW or step on the gas with a 56° wedge. Also, many times with wedges you’re better off on focusing more on leaving yourself with an uphill putt than you are trying to have the right distance into the flag. As I’ve shown with AimPoint, many times a 10 foot uphill putt can be easier to make than a 5 foot downhill putt.

With that, my philosophy is simple when it comes what to bag, the 3-iron or the 52° wedge. If I do not believe I will use my 3-iron in a typical round of golf at a certain curse, I’ll bad the 52° wedge. Secondly, I use the 52° wedge almost exclusively for full swings.

Many golfers will bag a 54° SW and a 58° SW. I think those golfers are more concerned with their full swing performance with those clubs than their shots around the green. I feel that is a bit backwards thinking because the shots around the green are statically more important to your score. It is usually easier to de-loft a wedge shot around the green than to hit it higher and still control the roll. What often happens is good golfers can add loft to the wedge around the green, but the ball will not roll as much and they have a difficult time calculating how much roll the ball will have. Thus, I find the 54° and 58° lofts to be a bit disadvantageous.

However, if you feel good about your shots around the green and like the yardages you hit them on full swing, you can have your cake and eat it, too.

I feel that this is mostly about personal preference. I will say that with Edel’s wedges, those short shots that you are likely to catch off the toe will come out better because the CoG is moved further away from the hosel and they extend the grooves out towards the toe, so you don’t have to worry about those knuckleball shots.

I know many golfers like all of their wedges the same length as their pitching wedge. I think that makes some sense from a full swing perspective, but it can mess up the MOI matching of the wedges. And I think some golfers may have a problem with the extra length on short shots around the green. 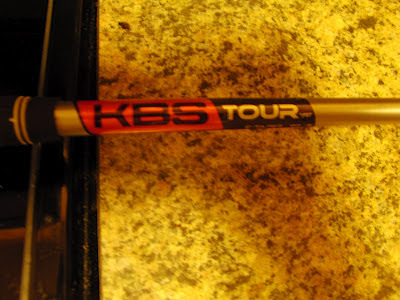 I have hit the KBS Tour C-Taper shaft before in a 6-iron and while I liked the feel and felt it brought the trajectory and spin down, I wound up hitting it too short. I think that’s because the static weight of the 6-iron was noticeably more and it made it a little more difficult to swing at a high speed for me.

There’s a lot that goes into a wedge shaft. With the grooves rule changes, many golfers have gone to a higher spinning shaft. However, the counter to it is that it may spin too much and if you need to hit a lower shot, it may be very difficult to do.

Some clubfitters believe that MOI matching is not necessary with wedges. I’m actually inclined to agree with them on some level. This is mainly because wedges are fairly easy to hit on full swings and the rest of it is just short shots around the green, where it’s difficult to discern the difference in the feel of the club swinging. However, my feeling is ‘what’s the worst that can happen?’

One of the beauties of MOI fitting and matching is that if you don’t like it, you can always remove the weight from the head and go back to whatever weight the clubs were before they were MOI matched.


Up Next, The Putter

Get all your favorite spirits and wines at Duty Free Depot!