What To Look For: 2018 Quicken Loans National

Congressional has soured on the event in recent years as it takes time for the course to recover from the event and there’s limited time each year to play at Congressional. That leads the Tour coming back to TPC Avenal…now TPC at Avenal Farm in Bethesda, Maryland:


I don’t know a lot about TPC at Avenal Farm other than it was one of the courses they used to have on the early versions of PGA Tour golf video games. But, I’ll let Wikipedia give the background on the course:

Originally opened thirty-two years ago in 1986, the course was roundly criticized for poor design in its early years. It was also plagued by years of flooding and drainage problems and by various turfgrass issues which affected the greens and often produced less than satisfactory tournament conditions. As a result, many top professionals stayed away, and the Kemper/Booz Allen tournament became unofficially relegated to "B" event status.

In the summer of 2005, Dewberry and Davis land surveying crews were regularly seen taking measurements across the facility, sparking rumors that the long criticized course would finally be reconfigured. Confirmation came in 2007, when a $32 million golf course and clubhouse renovation commenced in an effort to bring back a tournament to the Washington D.C. area. The renovation covered the entire course, which has been reshaped into a new 7,139-yard (6,528 m) course at par 70 with Rock Run Creek being expanded and cleaned up.

The controversial sixth hole (conceived as a weak copy of the 13th at Augusta National) was changed to a straightaway long par-four with the green now short and left of the creek. The par-3 ninth (famously maligned by Greg Norman, who suggested the original be "blown up with dynamite") was rebuilt with a new green up on a hill near the old practice green. The old 10th and 11th holes have been combined into the new tenth, a long par-five playing around the restored creek feature. The old 12th is now the 11th, with the old par-five 13th (another popular target of player angst) eliminated and replaced by a new, uphill par-three 12th and a short, par-four 13th.

In addition to the golf course, the project also included a new practice facility and short game area, and clubhouse renovations. In November 2015, the 7th and 16th greens were renovated to flatten contours and provide additional hole locations in anticipation of hosting the Quicken Loans National in 2017. Additionally, small improvements were made to a number of holes, including creating bent grass chipping and collection areas around the 3rd, 4th, and 18th greens, widening the 5th and 6th fairways, and flattening the front portion of the 13th green to create additional hole locations. Finally, the on-deck putting green was quadrupled in size from 1,500 square feet (140 m2) to over 6,000 sq ft (560 m2).

Last year TPC at Avenal Farm greatly favored players that were good at avoiding bogeys. Usually avoiding bogeys on Tour requires quality driving, long approach play, short game around the green and putting from 3-6 feet. The last critical hole on the course is the Par-4 16th hole which plays to 415 yards.

What I saw out of the 16th last year is that it was very difficult getting up-and-down when a player missed the green in regulation: 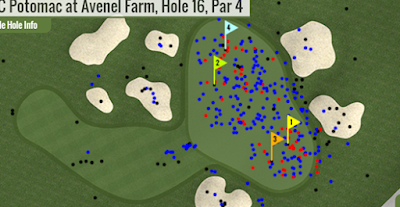 Players that missed short of the green or in the short right bunker only got up-and-down about 30% of the time. It sort of fits the characteristic of a ‘Critical Hole’ as the green is fairly shallow, but it’s not a super long hole and the up-and-down percentages are low. Since it’s not a long hole, plenty of players can find the GIR. But given that it’s a shallow green with low scramble conversion %, lots of players can easily make a bogey.

I think Tiger always has a shot at the Quicken tournament. I watch it each year online (if I can find it) and your article has just gotten me so much more excited for it! Oh and Great work as usual.

Whether you are just starting out, or a golfing veteran with a low handicap, you should have realized that golf irons are a significant part of the game. In fact, a set of irons is probably the most expensive purchase in your golf bag. With too many options on the market, choosing the best golf iron sets has proven to be a big challenge for even professional golfers themselves.
best golf iron sets

It doesn’t matter that what is the level of your skills and expertise; both cheap and expensive wedges are available to address your customized needs. As a mid-handicapper, you should never settle for a lower level game and should opt for the best available equipment best golf wedges

We invite you all to participate in our new business and project funding program, We are currently funding for Business start-up Business developments, Business acquisition Business expansion, Project funding and Working capital etc.

This Funding program allows a client to enjoy 3% low interest rate and payback period of 1 to 15 years. We can approve a loan/funding for up to a Million Dollars, Euros, Pounds or more depending on the nature of business we are currently funding for and we satisfy our customers’ financial needs and help them succeed